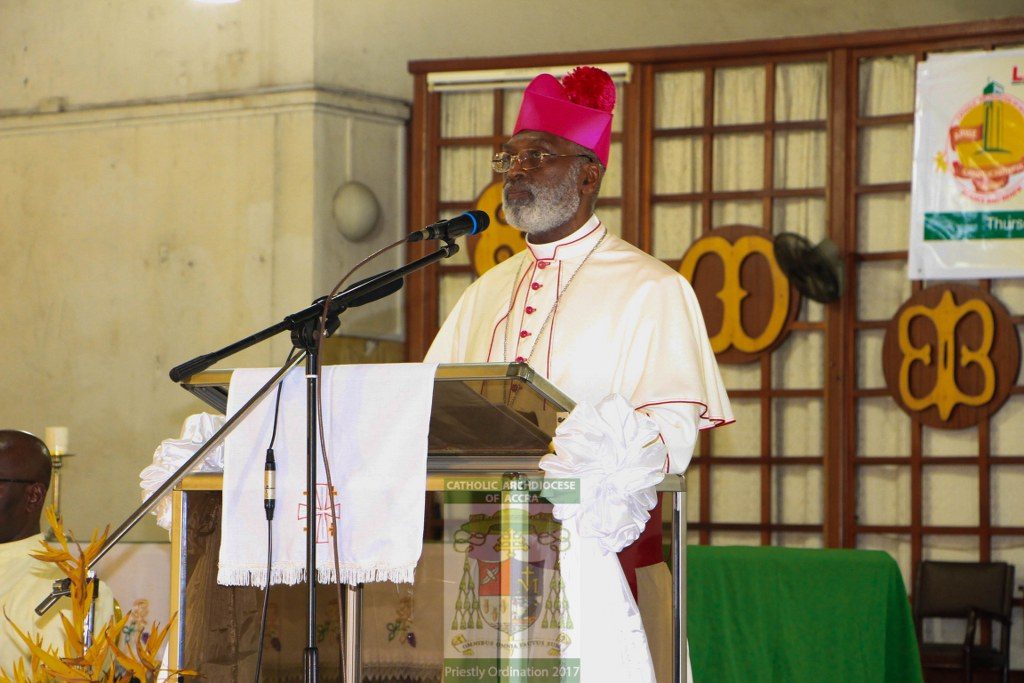 ADDRESS FOR THE LAUNCH OF THE CELEBRATIONS OF THE 125TH ANNIVERSARY OF THE CATHOLIC MISSION IN ACCRA ON THURSDAY, SEPTEMBER 21, 2017, AT THE HOLY SPIRIT CATHEDRAL, ADABRAKA, ACCRA.

O Give thanks to the Lord, for he is good!

For his great love is without end.

Let the House of Israel say it:

‘His love is without end!’

Let the House of Aaron say it:

And now, let the Archdiocese of Accra say it:  His love is indeed without end!

Surely, we all thought, well, let us see when that will be!  Today, thanks to the unfathomable graces of God, here we are at the launch of the celebrations of the 125th Anniversary of the Catholic Mission in Accra.

Without any doubt, you and I can once again borrow from the Psalmist that beautiful hymn of the Jewish Pilgrim to Jerusalem which says:  “I rejoiced when I heard them say, ‘Let us go to the house of the Lord’.  And now our feet are standing within your gates, O Jerusalem!” (Ps. 122:1-2.)

Yes, five or so years ago, we set off on this spiritual pilgrimage, a journey of preparation (individually, communally, parochially, and archdiocesan), and now our feet are truly standing on the threshold of the gates of our Jerusalem; our 125th Anniversary Jubilee celebrations.  Yes, let the house of the Archdiocese of Accra say:  God’s love is indeed without end!

I am happy to welcome you one and all to this event.  Permit me to repeat ditto-ditto parts of my address at the launch some five years ago of the 120th Anniversary celebrations which took place here on July 02, 2013.  I am saying this lest I be accused of plaigiarism of my own earlier address.  I will give a short historical panorama, then I will highlight some of the events lined up for this Jubilee celebration, and I will end with some exhortation to you all.

Our 125th Anniversary celebrations will start on Saturday, December 02, 2017, and close on Sunday, November 25, 2018, on the Solemnity of Christ the King with Holy Mass to climax it all again at the Black Star Square in Accra, God willing.   Again, this will be a year-long celebration throughout the entire length and breadth of the Catholic Archdiocese of Accra.

In the same 1893, the first Catholic Baptism in Accra took place of Mr. Louis James Buckle on May 25, and the first Holy Matrimony was celebrated between Herbert Cheetam and Rose Mary Quaye on August 12, 1894.  However, in 1895, the Accra Catholic Mission had to be closed down for Frs. Hilberer and Raes to return to Elmina to take up priestly duty there as a result of the successive deaths of their SMA confreres in that Mission due to tropical illnesses of malaria and yellow fever.  The Catholic community of Accra was, therefore, left in the care of a Church committee led by Messrs Andoh, Brown and Yankah.

It was only in 1924 that Rev. Fr. Joseph Stauffer SMA was posted to Accra, and he purchased an old cocoa shed situated on the Derby Avenue, which he later refurbished and turned into a chapel that was dedicated in 1925 as the Sacred Heart Church (of today), the premier Church and parish of Accra.

The SMA Fathers ministered to the growing Catholic community here until 1939 when they handed over the then Eastern Province of the Gold Coast colony to the Society of the Divine Word Missionaries (SVD).  Rev. Fr. Adoph A. Noser SVD became the first Superior of the Accra Mission.

In 1947, Fr. Noser was appointed the first Bishop of Accra, and on February 08, 1953, he laid the cornerstone of this magnificent Holy Spirit Cathedral. In the same year, Bishop Noser was transferred to Papua New Guinea to be the Archbishop of Alexishaven.  He was succeeded as Bishop of Accra by Rev. Fr. Joseph Oliver Bowers SVD, JCL., an African-Caribbean from the Commonwealth of Dominica, who became the first black bishop of the Gold Coast.

After three decades of solid, foundational missionary work here, in 1971, Bishop Bowers was transferred to the West Indies, his hometown, and he was succeeded by the first Ghanaian Bishop of Accra that same year, in the person of the Most Rev. Dominic Kodwo Andoh DD., JCD, my predecessor.  It was during Bishop Andoh’s episcopacy that the Catholic Diocese of Accra was elevated to the status of a Metropolitan See in 1992, and the Catholic Diocese of Koforidua was created by Pope (now St.) John Paul II.  Archbishop Andoh, the first Metropolitan Archbishop of Accra, led this Archdiocese to celebrate the Centenary of the Catholic Church in Accra in 1993, and he retired in 2005. The rest is recent history!

(Now, since the mortal remains of my two predecessors, Bishop Bowers and Archbishop Andoh, lie here in this Cathedral, let us rise and observe a moment of silence in prayer for the repose of their souls; one day, may they be counted officially among the saints of the Church as our patrons! *** Eternal Rest grant unto them o Lord, and let perpetual light shine upon them!  May they rest in peace!  Amen!  Let us sit!)

Here in my hand is a copy of the Acts of that Synod, and, for the past ten years almost, we have been implementing the recommendations that were given for the strategic development of our Archdiocese, spiritual, financial, material and institutional.  Sometime during these Jubilee celebrations, I believe, we shall have to have an Archdiocesan Pastoral Congress in order to give account of the state of the Catholic Archdiocese of Accra to you, my dear People of God.

Again, for your information, after a lot of reflection and evaluation of our 120th Anniversary celebrations and our preparations towards this Jubilee, we decided to declare as our official Archdiocesan Slogan: “Arise Catholic Faithful! Rejoice and Renew!”

It was also decided to maintain as our Archdiocesan Logo a slightly modified version of the 120th Anniversary Logo. This will from now onwards be the official logo for the Archdiocese of Accra until another decision is made in the future.

My dear brothers and sisters, my dear priests and religious, here is a copy of the 125th Anniversary programme of activities!  The celebrations should involve all Catholics of the Archdiocese in all our outstations and parish communities, in all our Church societies and pious associations, our apostolates and ministries. We are going to have celebrations on deanery as well as on Archdiocesan levels, of course.  Parishes and deaneries are to put in place their own local organizing committees to work hand in hand with the Archdiocesan 125th Anniversary Celebrations Committee.

The year’s programmed activities aim at the three goals indispensable to the mission of the New Evangelization; they are to foster and deepen

Some of the programme highlights are:

Two other very important events in the year ahead of us are:

The rest are in this brochure for you to keep and observe.  They will be communicated to you in the various parishes, outstations and rectorates.

O Give thanks to the Lord, for he is good!

For his great love is without end.

Let the House of Israel say it:

‘His love is without end!’

Let the House of Aaron say it:

And now, let the Archdiocese of Accra say it:  His love is indeed without end!

Yes, indeed, the Lord our God has been good to us in the Catholic Mission of Accra.  In the last 125 years, He has blessed us and we have grown from a mission station into the Metropolitan Archdiocese of Accra, the Catholic Diocese of Koforidua, and the Apostolic Vicariate of Donkorkrom.  We cannot enumerate the number of the Churches and chapels, educational facilities, from first cycle through secondary, vocational and technical to tertiary, hospitals, clinics and other health-care delivery as well as the many social services institutions, etc.

Yes, here and now, our feet are standing within the gates of our Jerusalem, on the threshold of the 125th Anniversary Celebrations of the Catholic Mission in Accra.  It is our hope and prayer that we will complete this year-long celebration under the maternal protection and solicitude of Mary the Immaculate Heart, Patron of our Archdiocese, whom we have been celebrating as Our Lady of Fatima in this Centenary Year.

My dear People of God, it is with the utmost sense of humility and gratitude that I now declare officially launched the celebrations of the 125th Anniversary of the Catholic Mission of Accra, in the name of God the Father, God the Son and God the Holy Spirit!  Amen.

Immaculate Heart of Mary, pray for us!

St. Peter Claver, pray for us!

All you Holy Martyrs of Uganda, pray for us!

And may St. Matthew on whose feast day we launch our 125th Anniversary Celebrations intercede for us!

“Now to him who by the power at work within us is able to do far more abundantly than all that we ask or think, to him be glory in the Church and in Christ Jesus to all generations, forever and ever. Amen!”(Eph. 3:20-21).