Catholic Communion Is Only For Catholics – Cardinal Sarah 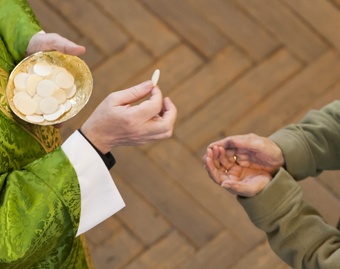 Catholic communion is only for Catholics – cardinal Sarah

Earlier this month, Pope Francis stirred controversy when he expressed comments about intercommunion while addressing a gathering of Lutherans in Rome.

Responding to a question from a non-Italian Lutheran woman who voiced her regret that she couldn’t receive Holy Communion with her Catholic husband, the pope said that while he would never dare give permission for her to receive the Eucharist because it’s not his competence or jurisdiction, he said she should “talk to the Lord and then go forward.”

Owing to confusion over the pope’s words, we asked Cardinal Robert Sarah, Prefect of the Congregation for Divine Worship and Discipline of the Sacraments, and Bishop Athanasius Schneider of Astana, Kazakhstan, for their opinion on the matter.

Cardinal Sarah offered initial comment, saying: “Intercommunion is not permitted between Catholics and non-Catholics. You must confess the Catholic Faith. A non-Catholic cannot receive Communion. That is very, very clear. It’s not a matter of following your conscience.”

1. Could a priest give Holy Communion to both husband and wife if he knows one is Catholic and one is not?

Sometimes, an Anglican who is very far away from his church for a very long period of time and who desires to receive Communion, can participate in Mass and receive Communion in the Catholic Church, where there is no sin, and he is properly married. Because they believe in the Eucharist, even if in the Anglican church is it not actually the Eucharist because there is no priesthood. But it is rare and would happen under very exceptional circumstances. This is something extraordinary and not ordinary.

But a Catholic cannot receive communion in the Anglican church, because there is no Communion; there is only bread. The bread is not consecrated, because the priest is not a priest. With the break of Henry VIII with the Catholic Church, priestly orders in the Anglican Church became null and void. So the consecration isn’t valid, and therefore it’s not the Eucharist.

And a wife who is Lutheran, or Anglican, and who is married to a Catholic man? If they go to Mass on Sunday, is it ever possible for her to receive Communion?

On the day of their marriage, the priest gave Communion to the Catholic husband and not to the Lutheran or Anglican wife. It’s the same if they go to Mass together, because there is no intercommunion: between Anglicans and Catholics, between Catholics and Protestants. If they go to Mass together, the Catholic can go to Communion but the Lutheran or Anglican cannot.

2. If we’re not unified in faith and doctrine, do you think opening the doors to intercommunion would undermine belief in the True Presence?

I think it would promote profanation. We cannot do this. It’s not that I have to talk to the Lord in order to know if I should go to Communion. No, I have to know if I’m in accord with the rule of the Church. It’s my conscience that says: “Go.” My conscience must be enlightened by the rule of the Church, which says that in order to communicate, I need to be in the state of grace, without sin, and have the faith of the Catholic Church. … It’s not a personal desire or a personal dialogue with Jesus that determines if I can receive Communion in the Catholic Church. How can I know that the Lord has really said: “Come and receive my Body.” No. A person cannot decide if he is able to receive Communion. He has to have the rule of the Church: i.e., being a Catholic, being in a state of grace, properly married [if married].

3. But some would say that opening the doors to intercommunion would be a way for the spouses to become more one?

But the Lord helps us to be one if we receive Him correctly. If not, it doesn’t create unity. We will eat our condemnation. St. Paul says: “Let a man examine himself … for anyone who eats and drinks without discerning the body eats and drinks judgment upon himself (1 Corinthians 11:27-29). Therefore, we don’t succeed in becoming one if they partake with sin, with disregard for the Body of Christ.

Bishop Schneider was similarly forthright about the issue, saying the Church must be “very clear with the Protestants, not hiding anything.”

“We read in the Second Vatican Council document that real ecumenism is not irenicism, but sincere dialogue in which we hide nothing of our identity.” He added that any gesture which is “not clear, not sincere, and ambiguous will never help true ecumenism” on “every level.”

He said “pastors and shepherds” have to be “very careful” in their pronouncements not to “create ambiguity and confusion among the people,” leading them to believe that “Catholic and Protestant doctrine are basically the same, with only minor differences.”

Regarding the pope’s words to the Lutheran woman, he also said it’s important not to exaggerate the infallibility of the popes. In his usual gestures and expressions, the pope doesn’t intend to “oblige, or to impose” the faithful to believe what he is expressing.

“I am convinced that Pope Francis is not against when someone says to him: ‘Holy Father, I do not agree with this expression. You have not said you oblige me to accept this, because it is not your intention to speak definitively. So we can be in a reverent dialogue with you to clear up these issues.’”

He added: “I think we need to be in a climate of dialogue which is free of intimidation. Otherwise, this will be an atmosphere of dictatorship, and I think Pope Francis does not like to be considered as creating an atmosphere of inquisition, dictatorship or persecution of someone who expresses reasoned thoughts and opinions.”