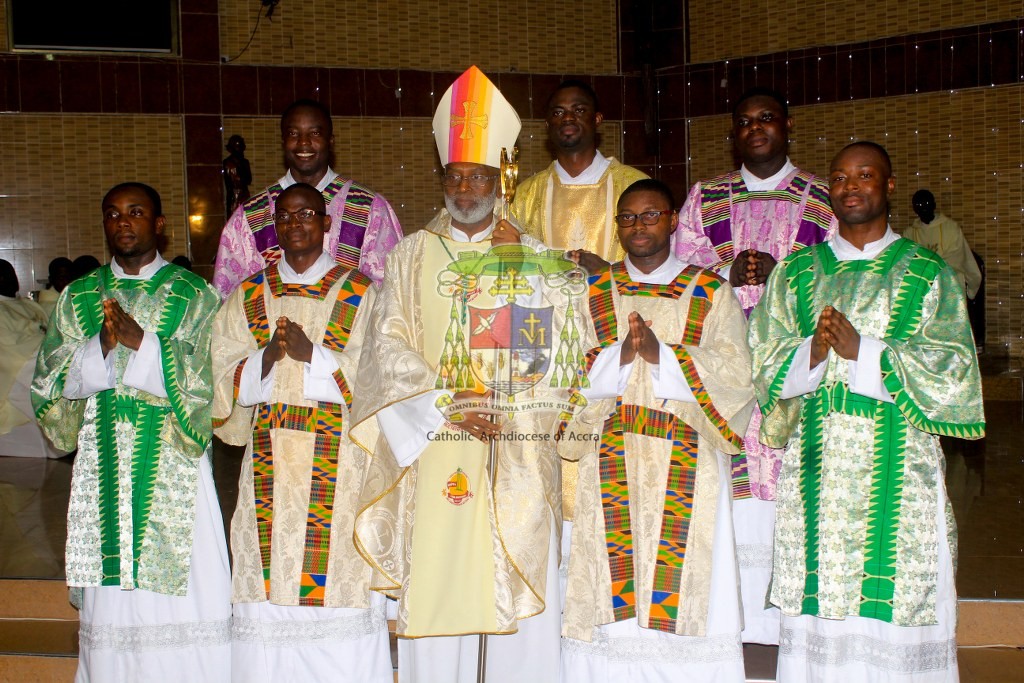 HOMILY FOR THE ORDINATION TO THE DIACONATE AT ST. JOHN THE BAPTIST PARISH, ODORKOR-ACCRA ON FRIDAY, JANUARY 06, 2012.

1.1: The Feast of Epiphany commemorates the presentation of the Messiah to the world of the Gentiles, the world of the non-Jews. According to the teachings of Holy Mother Church, St. Matthew, the Jewish Gospel writer, narrates this visit in such detail in order to emphasize the Good News that Jesus Christ did not come as Messiah for only the Jews, “the Chosen People”; he came to save all of humanity, even the non-Jews who, through their own sciences (for example the science of astrology), come to know God and recognize Jesus as King of Kings, as Lord of Lords and as the Conqueror of Death, the one who ushers in the Resurrection.

St. Matthew reports that “after Jesus has been born at Bethlehem in Judaea…some wise men came to Jerusalem from the east.  ‘Where is the infant king of the Jews?’ they asked.  ‘We saw his star as it rose and have come to do him homage’”.

We are not sure from where in the east, but we are informed that they were wise men who were certain that from their science of astrology, the star they had seen as it rose indicated the birth of “the infant king of the Jews”.  They were convinced of the identity of the one whose star they had seen and they were therefore coming “to do him homage”.

Now, why would foreigners, some people from the east, want to come and do homage to “the infant king of the Jews”?  Is it not strange that even the Jews themselves, their chief priests and scribes and their king, Herod himself, did not seem to have noticed anything extraordinary at the time?  It took “some wise men from the east” to awaken the Jews, the Chosen People, their priests and scribes and even their king to the news that “the infant king of the Jews” had been born.

And thanks to the enquiries of the wise men from the east, the chief priests and scribes of the people were compelled to re-read their Books of the Law and the Prophets in order to ascertain that “the Christ was to be born ‘at Bethlehem in Judaea’’’.

1.2:  My dearly beloved, the truth, or better put the good news, is that God in his own wisdom knows how to bring all people, especially those who seek him, to knowledge of the Saviour and Messiah, knowledge of the salvation he has prepared for humanity.  What is important here now, or what we learn for our lives of faith, is that we should be ready to follow the “star” that rises from time to time in our lives and seek from others who may know so that they may lead us to a better and deeper knowledge of God. That is what the wise men from the east did by going to King Herod in Jerusalem.  After all, they were looking for the “infant king of the Jews” who had been born; and that event had to be in the palace of the king in Jerusalem, the capital of Judaea.

1.3:  “The sight of the star filled them with delight…”: Now having been informed by the Jewish chief priests and scribes, and following what they were told, the wise men are blessed with the reappearance of the star which fills them with delight and leads them to where they find the infant king of the Jews.

My dearly beloved in Christ Jesus, in our life’s journey of faith, there are times of darkness and doubt.  The star we once had seen may disappear; that is the time we should never despair of God.  Let us go on seeking. When God sees our effort at seeking and enquiring, he rewards our steadfastness with the reappearance of the star in our life’s journey; it then brings us to where we find delight in the Messiah Son of God, because our faith and hope encounter the love of God in the person of Jesus Christ.

1.4:  “Then, opening their treasures, they offered him gifts of gold and frankincense and myrrh.” The sort of gifts these wise men from the east brought out of their treasures has very deep, indeed, mystical meaning.  Gold in those ancient days represented nothing but the most precious of gifts given especially to kings and royals.  Frankincense in the east represented devotion to the divine, in fact, adoration to God only.  Myrrh is symbolic of sacrifice and suffering in order to overcome death ultimately and attain eternal life.  So from these three gifts of the wise men who came from the east, St. Matthew teaches us all to give God nothing but our best, excellence in all our endeavours, the devotion and adoration that is due God only, and the acknowledgement that only in a life of sacrifice and even death with Christ Jesus is there victory over death for ever.

1.5:  Now permit me to address a word from this episode of the Magi to our deacons to-be!  Every seminarian starts his journey towards the Holy Priesthood with the appearance of a star; a desire to become a priest.  With the help of the formators in both the minor and major seminaries, with the help of family and friends, with the help of their priests, and even at times with the help of people unknown or most unexpected, if we listen attentively, God shows us what he would want of us and directs our paths towards the house where we encounter God in the person of Jesus Christ.

This evening, as you are soon to be ordained deacons, the final and most decisive step towards the Holy Priesthood, and who knows, maybe one day on to the episcopacy, the fullness of the Priesthood of Jesus Christ, Priest, Shepherd and Teacher, I can say that the star that sometimes appeared and even disappeared during your preparation in the seminaries, has now reappeared forcefully, and it is pointing you to the house where Christ is waiting for you with his Mother Mary and Joseph.

This evening, Jesus Christ is going to ask you for something deeper and more spiritual, or of even greater value than gold, frankincense and myrrh.  Soon, Jesus is going to ask that you become like him, chaste, obedient and poor so that as his minister/servant, you will be indeed Christ-like, and people coming into contact with you may come to know and encounter Jesus Christ the Way, the Truth and the Life in your person.

In these three virtues of chastity, obedience and poverty, Jesus will require nothing less of you than the Magi brought.  Out of your treasures, you will offer nothing to Jesus Christ the King of Kings, Lord of Lords and Saviour but the best, gold representing excellence in your ministry; you should do everything in deep devotion and adoration of God, represented by the frankincense; and you must be ready to sacrifice your life accepting to suffer like Christ did for the salvation of those you will be sent to as deacons, and later on as priests; this is represented by the gift of myrrh.

I hope, in fact, I exhort you after this ordination that, you continue to meditate on the story of the Magi and ask the Lord our God to lead you into its still deeper and more mystical meaning for your ministry as deacons and priests in the near future.

May Mary the Virgin Mother of Jesus Christ and Mother of all Christians intercede for you our deacons to-be and for us all Clergy, Religious and Laity, so that we will be truly sacraments of Jesus Christ the Servant of all, the Eternal High Priest, Teacher and Shepherd!