How We Know Jesus Was Born On 25th December 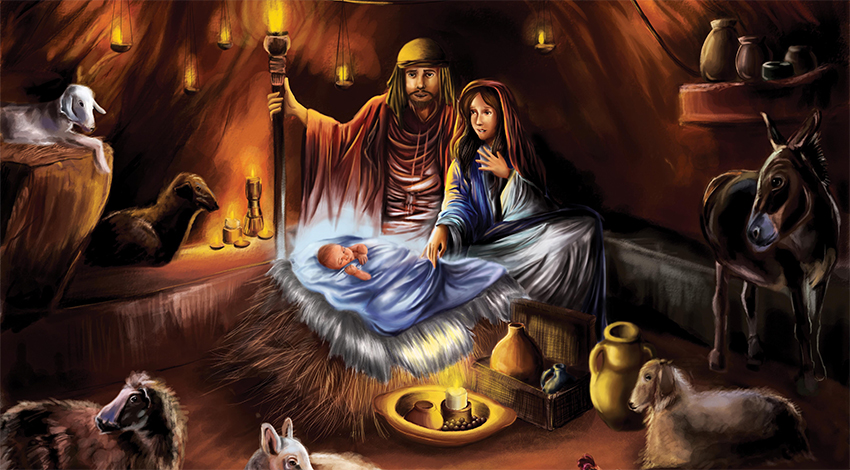 OBJECTION 1: December 25 was chosen in order to replace the pagan Roman festival of Saturnalia. Saturnalia was a popular winter festival and so the Catholic Church prudently substituted Christmas in its place.

OBJECTION 2: December 25 was chosen to replace the pagan Roman holiday Natalis Solis Invicti which means “Birthday of the Unconquered Sun.”

REPLY TO OBJECTION 2: Let us examine first the cult of the Unconquered Sun. The Emperor Aurelian introduced the cult of the Sol Invictus or Unconquered Sunto Rome in A.D. 274. Aurelian found political traction with this cult, because his own name Aurelianderives from the Latin word aurora denoting “sunrise.” Coins reveal that Emperor Aurelian called himself the Pontifex Solis or Pontiff of the Sun. Thus, Aurelian simply accommodated a generic solar cult and identified his name with it at the end of the third century.

The date of December 25th only became the “Birthday of the Unconquered Sun” under the Emperor Julian the Apostate. Julian the Apostate had been a Christian but who had apostatized and returned to Roman paganism. History reveals that it was the hateful former Christian Emperor that erected a pagan holiday on December 25. Think about that for a moment. What was he trying to replace?

These historical facts reveal that the Unconquered Sun was not likely a popular deity in the Roman Empire. The Roman people did not need to be weaned off of a so-called ancient holiday. Moreover, the tradition of a December 25th celebration does not find a place on the Roman calendar until after the Christianization of Rome. The “Birthday of the Unconquered Sun” holiday was scarcely traditional and hardly popular. Saturnalia (mentioned above) was much more popular, traditional, and fun. It seems, rather, that Julian the Apostate had attempted to introduce a pagan holiday in order to replace the Christian one!

OBJECTION 3: Christ could not have been born in December since Saint Luke describes shepherds herding in the neighboring fields of Bethlehem. Shepherds do not herd during the winter. Thus, Christ was not born in winter.

REPLY TO OBJECTION 3: Recall that Palestine is not England, Russia, or Alaska. Bethlehem is situated at the latitude of 31.7. My city of Dallas, Texas has the latitude of 32.8, and it’s still rather comfortable outside in December. As the great Cornelius a Lapide remarks during his lifetime, one could still see shepherds and sheep in the fields of Italy during late December, and Italy is at higher latitude than Bethlehem.

SO WHY 25TH DECEMBER

Saint Luke reports that Zacharias served in the “course of Abias” (Lk 1:5) which Scripture records as the eighth course among the twenty-four priestly courses (Neh 12:17). Each shift of priests served one week in the temple for two times each year. The course of Abias served during the eighth week and the thirty-second week in the annual cycle.[ii]However, when did the cycle of courses begin?

The second-century Protoevangelium of Saint James also confirms a late September conception of the Baptist since the work depicts Saint Zacharias as High Priest and as entering the Holy of Holies—not merely the holy place with the altar of incense. This is a factual mistake because Zacharias was not the high priest, but one of the chief priests.[iv]Still, the Protoevangelium regards Zacharias as a high priest and this associates him with the Day of Atonement, which lands on the tenth day of the Hebrew month of Tishri (roughly the end of our September). Immediately after this entry into the temple and message of the Archangel Gabriel, Zacharias and Elizabeth conceive John the Baptist. Allowing for forty weeks of gestation, this places the birth of John the Baptist at the end of June—once again confirming the Catholic date for the Nativity of Saint John the Baptist on June 24.

III) FROM MARY HERSELF: Sacred Tradition also confirms December 25 as the birthday of the Son of God. The source of this ancient tradition is the Blessed Virgin Mary herself. Ask any mother about the birth of her children. She will not only give you the date of the birth, but she will be able to rattle off the time, the location, the weather, the weight of the baby, the length of the baby, and a number of other details. I’m the father of six blessed children, and while I sometimes forget these details—mea maxima culpa—my wife never does. You see, mothers never forget the details surrounding the births of their babies.

Now ask yourself: Would the Blessed Virgin Mary ever forget the birth of her Son Jesus Christ who was conceived without human seed, proclaimed by angels, born in a miraculous way, and visited by Magi? She knew from the moment of His incarnation in her stainless womb that He was the Son of God and Messiah. Would she ever forget that day?[v]

Next, ask yourself: Would the Apostles be interested in hearing Mary tell the story? Of course they would. Do you think the holy Apostle who wrote, “And the Word was made flesh,” was not interested in the minute details of His birth? Even when I walk around with our seven-month-old son, people always ask “How old is he?” or “When was he born?” Don’t you think people asked this question of Mary?

So the exact birth date (December 25) and the time (midnight) would have been known in the first century. Moreover, the Apostles would have asked about it and would have, no doubt, commemorated the blessed event that both Saint Matthew and Saint Luke chronicle for us. In summary, it is completely reasonable to state that the early Christians both knew and commemorated the birth of Christ. Their source would have been His Immaculate Mother.

Shortly thereafter in the second century, Saint Hippolytus (A.D. 170-240) wrote in passing that the birth of Christ occurred on December 25:The First Advent of our Lord in the flesh occurred when He was born in Bethlehem, was December 25th, a Wednesday, while Augustus was in his forty-second year, which is five thousand and five hundred years from Adam. He suffered in the thirty-third year, March 25th, Friday, the eighteenth year of Tiberius Caesar, while Rufus and Roubellion were Consuls.[vii]

Also note in the quote above the special significance of March 25, which marks the death of Christ (March 25 was assumed to corresponded to the Hebrew month Nisan 14 – the traditional date of crucifixion).[viii] Christ, as the perfect man, was believed to have been conceived and died on the same day—March 25. In his Chronicon, Saint Hippolytus states that the earth was created on March 25, 5500 B.C.  Thus, March 25 was identified by the Church Fathers as the Creation date of the universe, as the date of the Annunciation and Incarnation of Christ, and also as the date of the Death of Christ our Savior.

Now then, March 25 was enshrined in the early Christian tradition, and from this date it is easy to discern the date of Christ’s birth. March 25 (Christ conceived by the Holy Ghost) plus nine months brings us to December 25 (the birth of Christ at Bethlehem).

Saint Augustine confirms this tradition of March 25 as the Messianic conception and December 25 as His birth:

For Christ is believed to have been conceived on the 25th of March, upon which day also he suffered; so the womb of the Virgin, in which he was conceived, where no one of mortals was begotten, corresponds to the new grave in which he was buried, wherein was never man laid, neither before him nor since. But he was born, according to tradition, upon December the 25th.[ix]

In about A.D. 400, Saint Augustine also noted how the schismatic Donatists celebrated December 25 as the birth of Christ, but that the schismatics refused to celebrate Epiphany on January 6, since they regarded Epiphany as a new feast without a basis in Apostolic Tradition. The Donatist schism originated in A.D. 311 which may indicate that the Latin Church was celebrating a December 25 Christmas (but not a January 6 Epiphany) before A.D. 311. Whichever is the case, the liturgical celebration of Christ’s birth was commemorated in Rome on December 25 long before Christianity became legalized and long before our earliest record of a pagan feast for the birthday of the Unconquered Sun. For these reasons, it is reasonable and right to hold that Christ was born on December 25 in 1 B.C. and that he died and rose again in March of A.D. 33.

[iv] The Greek tradition especially celebrates Saint Zacharias as “high priest.” Nevertheless, Acts 5:24 reveals that there were several “chief priests” (ἀρχιερεῖς), and thus the claim that Zacharias was a “high priest” may not indicate a contradiction. The Greek tradition identifies Zacharias as an archpriest and martyr based on the narrative of the Protoevangelium of James and Matthew 23:35: “That upon you may come all the just blood that hath been shed upon the earth, from the blood of Abel the just, even unto the blood of Zacharias the son of Barachias, whom you killed between the temple and the altar.” (Matthew 23:35)

[v] A special thanks to the Reverend Father Phil Wolfe, FSSP for bringing the “memory of Mary” argument to my attention.

[viii] There is some discrepancy in the Fathers as to whether Nisan 14/March 25 marked the death of Christ or his resurrection.