Why Catholics pray for the dead 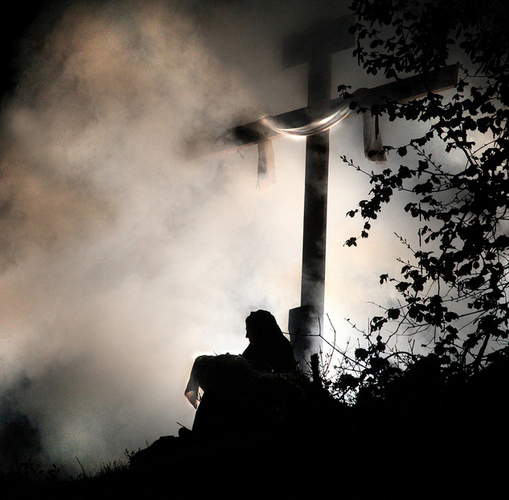 WHY CATHOLICS PRAY FOR THE DEAD – A VIEW

“But regarding the fact that the dead rise again, have you not read in the book of Moses, in the passage about the burning bush, how God spoke to him, saying, ‘I AM THE GOD OF ABRAHAM, AND THE GOD OF ISAAC, and the God of Jacob ‘? “He is not the God of the dead, but of the living; you are greatly mistaken.” (MARK 12:26-27)

Catholics believe, as you rightly said, that through faith we have been immersed and “inserted” in Christ; therefore,
“I have been crucified with Christ; and it is no longer I who live, but Christ lives in me; and the life which I now live in the flesh I live by faith in the Son of God, who loved me and gave Himself up for me. (GALATIANS 2:20)

Precisely because Christ lives in me and I in him, I believe that I shall never die. I have passed from death into life.
“Truly, truly, I say to you, he who hears My word, and believes Him who sent Me, has eternal life, and does not come into judgment, but has passed out of death into life. (JOHN 5:24)

Therefore Catholics believe that the Body of Christ that meets for worship includes all who have been baptized into Christ and are members of His Body. These form the COMMUNION OF SAINTS. This is why their Worship IN and WITH Christ in the power of the Holy Spirit far surpasses that of Moses on Sinai!!!

You have not come to a mountain that can be touched and that is burning with fire; to darkness, gloom and storm; to a trumpet blast or to such a voice speaking words that those who heard it begged that no further word be spoken to them, because they could not bear what was commanded: “If even an animal touches the mountain, it must be stoned to death.” The sight was so terrifying that Moses said, “I am trembling with fear.” But you have come to Mount Zion and to the city of the living God, the heavenly Jerusalem, and to myriads of angels, to the general assembly and church of the firstborn who are enrolled in heaven, and to God, the Judge of all, and to the spirits of the righteous made perfect, and to Jesus, the mediator of a new covenant, and to the sprinkled blood, which speaks better than the blood of Abel. (HEBREWS 12:18-24)

Go back and read these words again. Catholics take God’s Word in the Bible seriously.

Now listen to this also. These are Jesus’ own words. You should be good at debunking Jesus on what He says to Martha:
Martha said to Him, “I know that he will rise again in the resurrection on the last day.” Jesus said to her, “I am the resurrection and the life; he who believes in Me will live even if he dies, and everyone who lives and believes in Me will never die. Do you believe this?” She said to Him, “Yes, Lord; I have believed that You are the Christ, the Son of God, even He who comes into the world.” (JOHN 11:24-27)

This is why if you took a little time with a little humility to listen and not presume to know more than Catholics about their own beliefs and practices, you might discover why the Lord’s Supper (Eucharistia, Anamnesis, Communion, Mass) is the most important and SUPREME act of WORSHIP. Just listen to Jesus’ own words,

“I am the living bread that came down out of heaven; if anyone eats of this bread, he will live forever; and the bread also which I will give for the life of the world is My flesh.” Then the Jews began to argue with one another, saying, “How can this man give us His flesh to eat?” So Jesus said to them, “Truly, truly, I say to you, unless you eat the flesh of the Son of Man and drink His blood, you have no life in yourselves. “He who eats My flesh and drinks My blood has eternal life, and I will raise him up on the last day. “For My flesh is true food, and My blood is true drink. “He who eats My flesh and drinks My blood abides in Me, and I in him. “As the living Father sent Me, and I live because of the Father, so he who eats Me, he also will live because of Me. “This is the bread which came down out of heaven; not as the fathers ate and died; he who eats this bread will live forever.” These things He said in the synagogue as He taught in Capernaum. Therefore many of His disciples, when they heard this said, “This is a difficult statement; who can listen to it?” (JOHN 6:51-60)

My brother, does this sound like those who have bodily died in Christ are not spiritually alive in Him? They are dead in the flesh but alive in the spirit. They are alive in Christ. They are not spirits wandering and lingering all over the place but ALIVE IN CHRIST!! Notice also that Jesus Himself was put to death in the flesh (as his body l lay dead for three days in the tomb) but was made alive in the spirit so that He could descend into Hell and proclaim freedom to those dead since Noah!!

“For Christ also died for sins once for all, the just for the unjust, so that He might bring us to God, having been put to death in the flesh, but made alive in the spirit; in which also He went and made proclamation to the spirits now in prison, who once were disobedient, when the patience of God kept waiting in the days of Noah, during the construction of the ark, in which a few, that is, eight persons, were brought safely through the water” (1 Peter 3:18-20)

Where are the Saints? They are with the Lord. This is glorious. In fact the Apostle Paul believes that death in the flesh meant “going to be with the Lord”.

“For to me to live is Christ, and to die is gain. If it is to be life in the flesh, that means fruitful labor for me. Yet which I shall choose I cannot tell. I am hard pressed between the two. My desire is to depart and be with Christ, for that is far better.” (Philippians 1:21-23)

Where is Christ? Is the Lord dead? Where are those who have believed in His, suffered for Him and patiently endured with Him? When they die, where are they? Apart from the Catholic Church, try and pose these same questions to fifty different protestant churches and any of the remaining thousands of groups, and you will get fifty different answers and thousands other conflicting responses – all claiming to be speaking faithfully from the Bible ALONE! It is no news therefore that a protestant disagrees with a Catholic. This is because, among themselves, they have all never agreed on ONE SINGLE thing except that they all don’t want to be Catholic!

The Book of Revelation is written symbolic futuristic (apocalyptic) in genre but actualistic (for present) in meaning says of the saints,
“After this I looked, and there was an enormous crowd—no one could count all the people! They were from every race, tribe, nation, and language, and they stood in front of the throne and of the Lamb, dressed in white robes and holding palm branches in their hands. 10 They called out in a loud voice: “Salvation comes from our God, who sits on the throne, and from the Lamb!” 11 All the angels stood around the throne, the elders, and the four living creatures. Then they threw themselves face downward in front of the throne and worshiped God, 12 saying, “Amen! Praise, glory, wisdom, thanksgiving, honor, power, and might belong to our God forever and ever! Amen!” One of the elders asked me, “Who are these people dressed in white robes, and where do they come from?” “I don’t know, sir. You do,” I answered. He said to me, “These are the people who have come safely through the terrible persecution. They have washed their robes and made them white with the blood of the Lamb.” (Revelation 7:9-14)

I believe in God, the Father Almighty, Creator of Heaven and earth;
and in Jesus Christ, His only Son Our Lord,
Who was conceived by the Holy Spirit, born of the Virgin Mary, suffered under Pontius Pilate, was crucified, died, and was buried.
He descended into Hell; the third day He rose again from the dead;
He ascended into Heaven, and sitteth at the right hand of God, the Father almighty; from thence He shall come to judge the living and the dead.
I believe in the Holy Spirit, the holy Catholic Church, the communion of saints, the forgiveness of sins, the resurrection of the body and life everlasting.
Amen.

Lutheran Church
Do you believe in God, the Father almighty, maker of heaven and earth?
Do you believe in Jesus Christ, His only son, our Lord, who was conceived by the Holy Spirit, and born of the virgin Mary, suffered under Pontius Pilate, was crucified, died and was buried. He descended into hell. On the third day He rose again from the dead. He ascended into heaven and sits at the right hand of the Father. From thence He will come to judge the living and the dead?
Do you believe in the Holy Spirit, the holy catholic Church, the communion of saints, the forgiveness of sins, the resurrection of the body, and the life everlasting?